What is a drone survey?

Drones are continually proving to be a powerful tool in the fields of surveying and mapping by simultaneously providing efficiency and safety in a much more advanced way. A drone survey refers to the capture of aerial data by employing uncrewed aerial vehicles (UAV) such as DRONE. This provides topographic surveys of better quality compared to traditional methods with higher accuracy in measurements in a fraction of the time, reducing the surveying cost and human resources.

How is it Done? 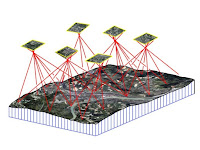 The field to be surveyed is photographed several times from different angles, with the help Drone’s downward-facing sensors such as RGB and spectral cameras, and each image is tagged with coordinates. The height and cameras of the drone can be adjusted remotely along with its orientation. They generate high-resolution orthomosaics and detailed 3D models of the area. By using Photogrammetry, images that contain the same point on the ground from multiple vantage points are combined to yield detailed 2D and 3D maps.

A crewless vehicle like a drone can take off and fly almost everywhere, which means we are no longer limited by unreachable areas, unsafe steep slopes, or harsh terrain unsuitable for traditional measuring tools. Capturing topographic data with a drone is up to five times faster than with land-based methods and requires less manpower. This substantially reduces the cost of a site survey and the workload of specialists in the field. It also provides more accurate and exhaustive data than the traditional way.

Drones will soon dominate a lot of construction engineering projects because of their affordability, ingenuity, and practicality. They will facilitate improved data density, data acquisition, and risk mitigation. Unlike satellite imagery or manned aircraft, drones can fly at a much lower altitude, generating high-resolution and high-accuracy data in a much faster and less expensive way and also independent of atmospheric conditions such as cloud cover.