Need for Cranes and the Risks Involved

Cranes have become an essential part of equipment for the construction of buildings and structures, especially as the height increases. The huge loads required to be lifted, and the heights that they have to be carried to often makes such operations fraught with risk. This risk increases when the operators also have to contend with extreme wind and weather conditions that can increase the stresses on the cranes.
Quite often, the crane operations are very much part of the critical path activities on project sites. Thus, accidents can cause serious loss of productivity and affect project schedules to a great extent. Because of the heights and sizes of such construction cranes, areas around the construction site can also be at risk, especially in populated areas. It is quite a standard practice for cranes to be designed and built for a particular project so that any peculiarities regarding area to be covered, heights, materials to be lifted and safety features required, are all tailor-made for that particular site. 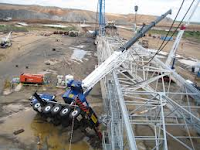 Crane Accidents in Past

● The Big Blue crane accident occurred in 1999. At some point during the construction of the Miller Park baseball stadium in Milwaukee, the ‘Big Blue’ crane collapsed with a load of over 450 tonnes on the hook. The incident killed three ironworkers. The cause of the accident was due to a large force of the wind which was not considered for the load the crane was lifting, despite climate warnings by some of the field workers. 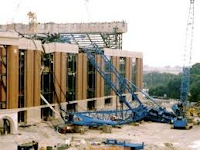 ● Termed as the worst crane accident in New York City by the then-Mayor Michael Bloomberg, the crane collapse in Manhattan killed seven people and injured 24. The 200 feet tall luffing-jib tower crane snapped off when the workers were trying to attach a new steel collar to extend the crane upwards.

 Buckling or collapsing when subject to lifting and torsion stresses caused by poor operations like exceeding lifting and moving speeds or slewing speeds.

 Poor foundations, due to improper outrigger use or poor positioning of counterweights.

 Struck by a crane boom or jib while dismantling the boom, specifically when the pins holding its sections together, are removed without adequate support to prevent the sections from falling. 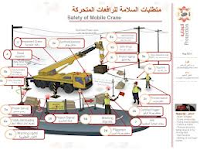 ● Ensure the stability zone of the equipment.
● Ensure all safety devices are in place.
● Ensure that all personnel are a safe distance from the equipment, the loads and any other objects within the lift zone and its perimeters.
● Use a standard set of hand signals and communication protocols in facilitating the safe operation of cranes.
● Keep loads as low to the ground as is reasonably safe when performing lifts.
● Secure the load after it has been lifted and properly stow the crane, stabilisers, winches and any other moving parts.
WRITTEN BY: Shivangi Baral and Priyasha Das