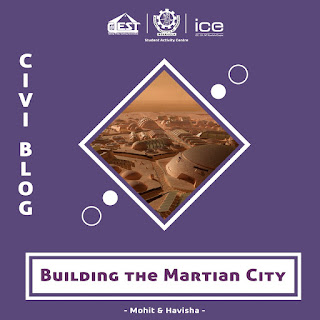 After mankind took a step on the moon, it has never looked back, now it has even greater goals of settling down on a new planet which is Mars. The root of the challenge to get there is that the scale of a trip to Mars is extremely large and complex. The challenges are formidable. For example, almost two-thirds of Mars missions have experienced some failure or mishap. Mars is about 150 times further from Earth than the Moon. That might not sound like a lot, but think about what that means when it comes to added power. More fuel will mean more weight. More weight means larger capsules and larger rockets. These challenges alone place a trip to Mars on a different scale from merely "hopping" to the Moon. The carriage of food and supplies is also a question of the hour.

The next challenge is to make a sustainable living area in the harsh conditions the planet possesses now, which will require advanced civil engineering technology and 3d printing to make the possibility come true.

NASA's rover missions to Mars, like the Viking, Pathfinder and Curiosity gave us invaluable knowledge about the Martian soil composition. Onboard x-ray spectrometers analysed the soil and found that it constitutes clay-like materials and mineral resources including iron, titanium, nickel, aluminium, sulphur, chlorine, and calcium. Sulphur-Dioxide (SO2) was found to be the most common material on Mars. Glass products could likely be constructed on Mars in much the same way as they are on Earth. Concrete is the building block of most modern constructions. However, concrete needs water, and water is difficult to find on Mars. So, researchers have suggested an alternative sulphur concrete that can be made entirely out of raw materials found on Mars.

With all building blocks in place, the next logical step would be finding an efficient and safe habitat design that will protect its inhabitants from harmful radiation and toxic soil. Marsha, in short for 'Mars Habitat', is a 3D printed vertical habitat designed by AI SpaceFactory. It is a four-storeyed, egg-shaped structure printed using a mixture of Martian rock and plant-based polymer.

NASA is confident that it can overcome the challenges, but they are not quite there yet. SpaceX says it's getting ready. The plans from other countries are less knowable, but they are serious about Mars, as well. Still, the plans are very much theoretical. Over the coming two decades, mission planners hope to close the gap between theory and reality. Maybe then, humanity can actually send astronauts to Mars on long-term missions of exploration and eventual colonisation.