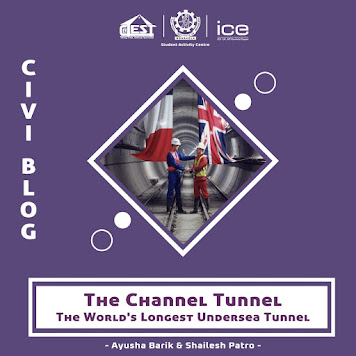 The construction of this tunnel was first proposed in 1802. However, due to the lack of appropriate techniques and engineering skills, it was aborted. The project was officially launched in 1973. The engineering, construction, procurement, and project management services contract was awarded to Bechtel. The Eurotunnel consists of three tunnels running parallel to each other, including two rail tunnels and one service tunnel. The rail tunnels, which are located 30 meters apart, have a diameter of about 7.6 meters while the service tunnel which is situated in between the two rail tunnels has a diameter of about 4.8meters. A total of 11 tunnel boring machines (TBMs), each weighing approximately 450 tonnes, were used to dig the tunnels, at the rate of 250 feet a day. Five TBMs dug from France; six TBMs dug from the UK. Machines with a combination of extremely high-pressure water jets and rotating disc cutters were used to burrow through the land beneath the Channel.

Assessments of the geotechnical conditions along the route of the tunnel had started in 1956. Surveyors began collecting data about the marine environment and geology to determine the most suitable rock strata and prevent any geological hazard along the way of the tunnel. The survey revealed that the top and middle layers had a high level of porosity, which made it unsuitable for digging. The upper layers had sand and gravel, which were hard to drill.

Surveying was an essential part of channel tunneling construction, without proper and accurate surveying the project would have ended as a disaster. Marine soundings and samplings were carried out by Thomé de Gamond during 1833–67, which established the seabed depth at a maximum of 55 meters (180 ft.) and the continuity of geological strata (layers). Surveying continued over many years, with 166 marine and 70 land-deep boreholes being drilled and over 4,000-line-kilometres of the marine geophysical survey completed. Surveys were undertaken in 1958–1959, 1964–1965, 1972–1974 and 1986–1988.

Much of the land used had traditionally been used for agricultural means. A large volume of vegetation was destroyed on land that was temporarily and permanently acquired for the construction and subsequent operation of the Channel Tunnel.

Soil disposal: Early on in the design process developers acknowledged that soil disposal was an issue that had to be managed. It was known that the Channel Tunnel would have a mammoth impact on the landscape due to earthworks. The sand was pumped rather than trucked to reduce the environmental impact of this activity. It was observed that soil disposal had a significant effect on land and vegetation.

Water pollution: Although precautionary measures were taken, silt deposits did accumulate, and streambed cleaning had to be undertaken by Eurotunnel to cleanse the waterways to evade damaging stream flora and fauna.