The construction industry is different from other sectors because it involves more outdoor work and is more risk-oriented. Moreover, as it is labour-intensive, there is a need for safe construction. With the advances in robotics, robots can take over dangerous tasks. Swarm robots are one such invention. The idea here is to utilise simple robots to build a design without central guidance. They are a technological marvel that combines the benefits of robots with the power of large numbers. These robots have limited physical abilities and programming, and yet they do amazing things. 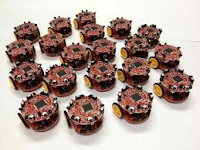 Nature has always been an inspiration for many inventions. This is no exception. Think about an ant colony. Millions of insects work simultaneously to make a termite mound that includes features such as ventilation systems and humidity regulation in a short time. The distinctive quality here is that there is no leader giving instructions. Even if some insects wander off or are eaten by predators, the rest can continue and get the job done. The group adjusts themselves to the changes in the workforce. Inspired by this, the team at Harvard's Self-organizing Systems Research Group built a group of swarm robots to build a brick wall.

1. Robots should be self-controlled and independent, with only access to local information. They should have the ability to use their sensors to manipulate themselves based on their shared environment.
2. The number of robots is unknown and changes during a project. Moreover, the order and timing of their actions are not predictable. So, the algorithms should be programmed to handle the variability.
3. Individual robots of a swarm lack the abilities available to more sophisticated robots.
4. The most significant challenge is connecting the low-level behaviour of the individual robots with the high-level behaviour of the swarm. The trademark of complex systems of respective agents is the collective behaviour that emerges from their joint actions. However, there is no way to predict what the collective behaviour will be like beforehand.

Advantages:
1. Increased performance: If tasks can be decomposed by parallelism, groups can make tasks to be done more effectively.
2. Enabling tasks: Groups of robots can perform specific functions that are impossible for a single robot.
3. Dispersed action: A group of robots will operate at the same time in various locations.
4. Fault tolerance: The malfunction of a single robot within a community does not mean that the mission cannot be completed due to the redundancy of the device.
Disadvantages:
1. Interference: Robots in a group can interfere with each other due to collisions, occlusions, and so on.
2. Confusion concerning other robots' intentions: Cooperation includes the knowledge of what other robots are doing. If this is not obvious, robots will compete instead of cooperating.

Presently, there is no commercial application of the robotic swarm construction; the reasons being as follows:
1. No proper algorithm.
2. Lack of infrastructure and research facilities.
3. Analysis and modelling: Swarm-robotic processes are typically stochastic, non-linear, making statistical simulations difficult for validation and optimisation.
Swarm robots can perform tasks in which the primary purpose is to cover a large area. Robots will scatter and execute surveillance activities. It may be instrumental in tracking dangerous incidents, such as contamination of toxic material.
The number of possible applications is auspicious, but the technology must still be developed in the algorithmic, modelling, and miniaturisation.
WRITTEN BY : Havisha and Mohit